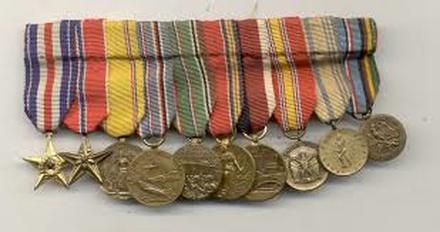 Private Spetz was with Company A of the 164th Infantry and met his death at the Toul Sector of the west front in France.  Private Lloyd William Spetz who was the first man from Burleigh County to lose his life in service to his country in World War I.  Spetz was born in Underwood, North Dakota April 18, 1894.  He enlisted in the Company A, 1st Infantry, North Dakota National Guard on May 2, 1917 in Bismarck, North Dakota. He served in Company A, 1st Infantry, 164th Infantry to January 9, 1918 and in Company K, 18th Infantry.  He served overseas from December 15, 1917 in France and was Killed in Action in the Toul Sector of the west front in France on March 1, 1918.  He is buried at the St. Mihiel American Cemetery in Thiaucourt, Meurthe-et-Moselle, France.  Among other decorations and awards he received a silver star for gallantry in action.

The first officers of the post were: Arthur R. Jones, commander; Phillip H. Webb, vice-commander; Paul M. Jewell, adjutant; P. G. Harrington, finance officer; M. B. Gilman, chaplain; Ambrose Galliger, historian and Emil Bressler, sergeant-at-arms. They were extended greetings by the local post of the Grand Army of the Republic, with the invitation to appear with them in uniform at the Memorial Day services.

The newly formed post staged numerous activities during its first few months to raise funds to host the first department convention in the fall of 1919. A membership drive was started and the post grew in its first two years to nearly 500 members.

By 1925, the memories of military life and the bonds of mutual service were being forgotten as the men got back to civilian life. This was a period when it was a struggle to keep the post alive and plan interesting programs. It was during this time the post fell to its lowest membership of 200.

After that period, membership and activities kept increasing. By its 50th anniversary celebration in 1969, membership was over 2,000 for the first time. The membership peaked at over 2,600 in the early ’70s. The 1994 membership was 1,239.

Karl Riedel was the last man of the World War I veterans and he was presented the “last man award,” a bottle of spirits, on Nov. 11, 1994, which also happened to be Karl’s 101st birthday. A large number of our comrades have been transferred to Post Everlasting in the last 10 years.

Since its beginning, the members of Post #1 have never been hesitant to attack actions, utterances or displays which are not representative of true Americanism. In its early years of existence, Americanism and service to veterans, widows and orphans were the primary concerns of the organization. On the lighter side, basketball teams were organized, wrestling and boxing matches held, and a Post Quartet often led group singing.

In 1922, bugles arrived in preparation of forming a drum and bugle corps. In 1927, the Corps was officially organized under the direction of Spencer Boise. The Drum and Bugle Corps of Post #1 was officially named the “Governaires” in 1959, by Gov. John E. Davis. There were performances at national and state conventions, and many community events. The Corps entered competition at the national and state level and won many championships. They had an impressive career. Many of the trophies are still on display. The Corps disbanded in 1989 after performing in the North Dakota Centennial celebration parade.

American Legion baseball had its beginnings in 1927 at Bismarck. John Karasaweisz was appointed athletic officer in charge of baseball. Through the years the program grew and in later years as many as four teams were sponsored by the post. Presently, there are three teams. The first team has carried the name of “Governors” for many years. This team has been state champion several times. Post #1 has been host to regional, sectional and national tournaments, plus many state tournaments. Baseball is the largest program of Post No. 1. 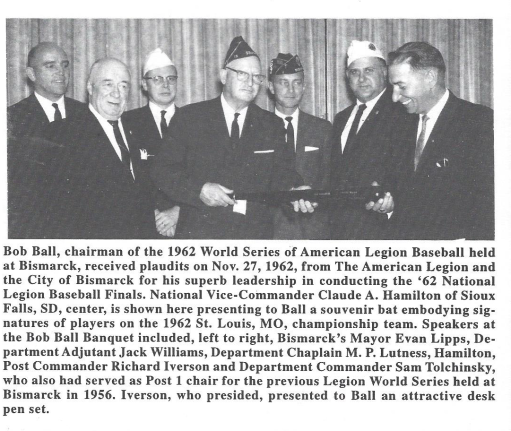 In 1929, natural gas arrived in Bismarck. A group of Legionnaires met to discuss what should be done with coal that everyone had left in their homes. A plan was prepared to redistribute the coal to the needy who could not readily convert to natural gas. This group of Legionnaires could be the fathers of the “Open Your Heart” program sponsored by Post #1 to distribute food baskets and provide clothing to children through age 13 in needy families at Christmas. Funds are solicited from the community to finance this highly successful project. Well over $30,000 per year has been donated in recent years, which does not include large amounts of canned food donated by school children in the community. As many as 500 food baskets have been distributed in one season and over $10,000 spent for children is clothing. For many years the program reached out a considerable distance from Bismarck, but the program is now restricted to Burleigh County.

Members of this post have been in the forefront of the State Oratorical program for a long time, from sponsoring contests on the local level to hosting the national contest. The Conrad Leifur oratorical traveling trophy, which is placed at the state oratorical champion’s high school, originated in Bismarck. Leifur, a past commander of Post 1, served as state chairman of the oratorical program. Charles Schroeder served many years as director of the department oratorical contest and currently Vern Fetch fills that position.

The Boys State program has always been well supported. Up to 40 young men have been sponsored in one year. Several of the attendees have become Boys State Governor and gone on to Boys Nation. Programs that are still being sponsored are Americanism, Child Welfare, Scholarships, Employment of the Handicapped and Public Relations. Veterans Day and Memorial Day have been faithfully observed with programs. Color guards and honor guards have been provided.

The post has had several homes since its beginning. The Elks Club facilities and the A.O.U.W. Hall were both utilized as meeting places before the World War Memorial Building was completed in 1930. The building committee of the post expended a lot of effort to make the World War Memorial building a reality, which gave Post #1 a permanent home. In 1943, the first veterans club was started on Main Street between 3rd & 4th Street. It was later changed to the American Legion Club.

In 1949, planning began for a new post home. A new building committee was appointed in 1950. In March 1951, a new building was dedicated on the corner of 3rd Street and Rosser Avenue. This structure served as the post home and provided the best club facilities in the state for many years. It remained the headquarters for Post #1 for the next 43 years. However, in 1994, it became obvious that it was necessary to downsize the Post I club operations. So planning was initiated to sell the building and to relocate the post and club operations to a smaller site where facilities can be maintained on a cost-effective basis. From that base, Post I will continue to fulfill the purposes of The American Legion.

For nearly a century, Bismarck’s American Legion Post 1 has been miss-named, but now, that is corrected.

The original charter issued to Loyd Spetz Post No. 1 on August 6, 1919, correctly spelled his name, but a second charter was issued on March 3, 1921, incorrectly spelling his name as Lyoyd Spetz. A third corrected charter was issued on March 5, 1929, backdated to March 3, 1919, on which his name was spelled with the more common spelling of “Lloyd” Spetz, and it has remained with that spelling until now.

In preparation for the centennial of the American Legion in 2019, the Executive Committee of Bismarck’s American Legion Post No. 1 requested and received a corrected charter issued by the National American Legion correcting the Loyd Spetz’s incorrect spelling. The Bismarck Tribune, in its Wednesday, March 6, 1918 issue reported that Loyd W. Spetz was killed in action. On March 1, 1918, he was the first Bismarck citizen killed in France in WWI.

Past Post Commander Bob Wefald led the effort to secure a charter with the correct spelling of Loyd Spetz. “I first observed the problem when I visited the grave of Loyd W. Spetz at the St. Michel American Military Cemetery in France in 1997,” Wefald said, “but the spelling “Lloyd” had been used for so many years no action was taken.” With the centennial of the American Legion and Post No. 1 being observed in 2019 the executive committee deemed this the proper time to correctly spell the name of Loyd Spetz on our charter. “This was the right thing to do,” noted Commander Arnie Havelka, “as we need to properly honor the fallen soldier for whom our Post No. 1 is named.” All future to our Bismarck Legion will be in the name of Loyd Spetz Post No. 1. The North Dakota American Legion represents nearly 16,500 Legionnaires, 8,000 Auxiliary members and nearly 700 Sons of the American Legion. The American Legion and Auxiliary have been a driving force in the State of North Dakota for more than 90 years, leading the way on issues of importance not only to veterans and their families, but also to the youth of the state and the overall welfare of North Dakota.

Want to learn more about our organization or have questions? Feel free to contact us…